Are You A Sumo In Disguise? 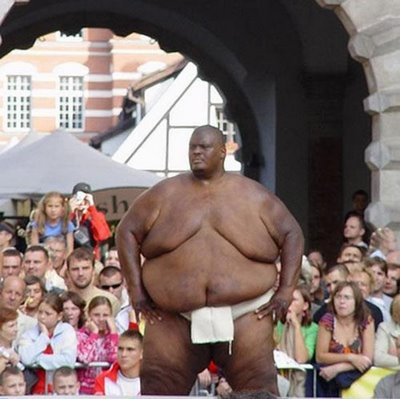 A sumo wrestler usually weighs anywhere from 350lbs to 500lbs. The one is an exception he's 770lbs! Though there is major genetic aspect to these sumo wrestlers getting this big (chosen when they are younger because they are naturally bigger) their traditional routines really have proven to put on weight since the 16th century. Most sumo wrestlers are required to live in communal "sumo training
stables" where
all aspects of their daily lives—from meals to their manner of
dress—are dictated by strict tradition.

The worse part is, I see many people in assessments that follow a similar tradition as the sumo wrestler without knowing it. Here's the sumo's traditional routine;

7am – Workout on empty stomach (meant to build up an appetite) for 5 hours straight, they work on flexibility, power, speed, and leg endurance performing about 200 traditional sumo squats a day

11am – Lunch consists of 10 000 calories of a mixture of a whole bunch of foods including; Sushi, rice, fried chicken, pasta, vegetables, beef, tofu and lots of the secret drink…beer. (The point here is that they raise their insulin so high that it will all be stored as fat…and some muscle…but mostly fat.)

After lunch – They go straight to bed to sleep for 2-3 hours. Making sure they don't waste those calories for energy.

Dinner – They repeat what they did at lunch time with more food (another 10 000 calories) and more beer, followed by sleep. (Beer is great for getting fat, it adds an extra fuel for your body to use before it reaches the glucose and finally your fat stores.)

Summery: So if you want to get fat, make sure not to eat breakfast and workout for hours of to really bring up cortisol and build up an appetite. When you finally get a chance to eat, (don't waste it) go nuts and eat as much of everything as you can especially carbohydrate calories and lots of beer. Follow that with a nap and repeat once more before bed time.

PS: If you don't want to get fat do the opposite