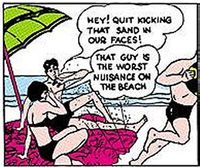 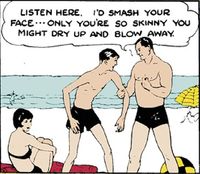 Many teenagers turn to lifting weights because they don't want to be the victim of bullying. They realize that maybe if they put on muscle, bullies will leave them alone.

This is a special interview with one of my best buddies. He was one of these guys that got bullied pretty bad in school. His story will help anyone being bullied out there. So please share it.

1. Do you remember the Charles Atlast comic characters where the guy kicks sand in his face?

Yes, I remember it, kind of fits where I came from only I did not punch out the bully, lol. I wished I did on many occasions though.

2. Tell me about a specific time you were bullied as a kid?

I can say on the bus to school and back home was one of the worst moments in a day. Between 7th grade and 10th grade, I wouldn’t even take the bus home, I would walk. 20 min to get home by bus or 1 hour to walk and I preferred walking because it was getting bad. They would find whatever kind of food on the floor (apples, orange peels, banana peels) and rub it in my hair or catch me off guard and sneak up behind me and rub it in my face. Constantly bullied for being fat and half Chinese. When you’re bullied for being fat, naturally this links to bad hygiene and that I would never get a girlfriend (Seems like those insults just go together). That was the more embarrassing part for me.

I’ve been pushed into lockers, Pilled up on in the yard and snow shoved in my clothes and face, kids went to those Joke stores and bought fart bombs, crushed it and put it on my bench in the bus (In the morning), I would sit on it and then I stank all day, gum put in my hair, etc. In primary school, it was a lot of childish things but high school was getting more provocation for a fight. The times I hated the most was being bullied in front of a group of people (including those not involved) for example in the cafeteria. Another would be when they started to get at me that I would never get a girl or when they would start there bullying in front of a girl simply because I was talking to her to embarrass me. It was all mental bullying mostly.

I remember once, recess, was invited to play football in the yard, I was all exited because they invited me but in the end, they simply wanted to gang up on me and they shoved me in this pile of mud. I was in school the whole day full of mud. (That primary school). The most personal times was when they insulted my for being half Chinese. Insulting my mom more specifically. Saying I should leave Canada and join the other fatties in China and blah blah blah. Constant insults usually  by a group of 5 or more. I can’t remember being bullied by 2 or 3 ppl at once, usually it was a crowd.

3. How did you feel at that point in your life?

Low, lower then dirt. Self confidence was non existent. Even to this day, I have a hard time sometimes.

When I finally had enough, I joined football. This was not only because I knew it would be good physically but also because I needed that hardliner coach/trainer to give me a bit of mental discipline and push me in the butt. I was committed to going to practice (this was not a “come when you want” kind of scenario), Football helped a lot with cardio and ensurance but I got more injuries then I expected so my coach told me to start hitting the gym and bring up my strength which is where I met my next coach. I trained at Fitness Warehouse in Rockland with Curd Hos who taught me about power lifting. I started training like a power lifter (never got interested in competing though). It was so impressive to see some guy’s pressing more then there own body weight, sometimes with ease. Squatting weight only seen in comics. It reminded me of the Incredible Hulk. These guys’s intimidated me more then the bullies. I started training like a power lifter and eventually, after reading so much on training, I merged to training like a bodybuilder.

I noticed when I started training in power lifting, I was gaining significant size. I was already big and chubby but this was different. I was getting shape, big shoulders, the biceps were coming out more and with the pounding I was taking in football, I was getting some confidence since no way these kids in High school can do worse. When I started in bodybuilding, my strength went down big time but my size was displayed much more. No one can see power until you lift something but everyone sees the muscles, even when you’re wearing a long sleeve shirt. Most times, ppl will not want to test and see if you strong, they’ll take your arms word for it.

I’m not saying that simply having muscles eliminated my problems with bullies but they did calm it down a bit. I was no longer just the fat kid in the hallway, I was the athlete who played football, powerlifted and had the size/muscle to prove it. Intimidation was setting in and I never even had to do anything to anyone, I just showed my hard work. Bullies are use to getting attention at other peoples expense, I was getting it on my own and I think this brought a bit of respect my way as well.

To this day, I’ll run into some ppl from high school and they all tell me how they all “respected” me growing up or something along those lines. Funny, I never got that impression.

5. What advice would you give a young guy that is being bullied right now?

Turn to other physical activities to release the frustration. This will not only help you mentally but also physically and in your health. Weather you’re a couch potato, computer geek or simply someone with a bulls eye on your head, it doesn’t matter, others will notice your hard work and will respect you more. Bullies have nothing on there side when no one else joins in. Most crowds are followers with only one real bully who feeds this crowd. Be the leader, show you can control your own path and achieve the goal and people will look up to YOU instead. People admire those who accomplish what they can never do.