Salad Can Make You Fat 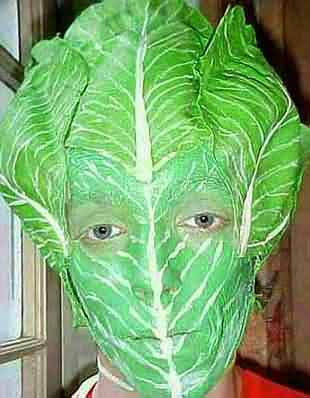 I know what you're thinking. I'm crazy like this salad head guy?
Well I have to tell you, I was a surprised when I found out about this too.

The upper part of the intestine contains cells that release hormones into the bloodstream when they are stretched, like after a meal. These hormones signal the pancreas to produce some insulin to prevent a blood sugar rise that might otherwise follow the digestion of the meal. Large meals will cause greater stretching of the intestinal cells which will in turn secrete proportionately larger amounts of these hormones. Since very small amounts of insulin released by the pancreas can cause a large drop in blood sugar, the pancreas simultaneously produces the less potent hormone glucagon to offset the potential excess effects of the insulin which will cause gluconeogenesis and glycogenolysis and there by raise your blood sugar.

Summery: If you eat enough to feel really full then even if it's salad it will still increase blood sugar and insulin. And as we know what insulin does. Insulin is the fat storing hormone.

Here's the story of Dr. Bernstein (not the same guy that your're thinking of) and his patient from his book Diabetes Solution.

"Many years ago a patient asked me why her blood sugar went from 90mg/dl up to 300mg/dl every afternoon after she went swimming.  I asked her what she ate before her swim. "nothing, just a freebie," she replied. When I asked her how much salad she was eating before her swims, she replied "a head."

A head of lettuce contains 10g of carbohydrates, which can raise a type I adults blood sugar about 50mg/dl at the most. So what accounts for the other 160 mg/dl rise in blood sugar?"

He calls this process the The Chinese restaurant effect where you could eat a whole bunch of bean sprouts but if you eat to the point where your stomach feels very full you're still going to raise your blood sugar.


We know the importance of health and fitness