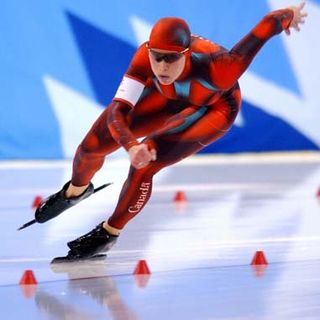 Watching the massive thighs of the 500m speed skaters, I couldn't wait to write an article to analyse what they are doing and figure out what we can incorporate into our workout to take advantage of this development.

Short track speed skaters are required to be highly explosive and have
great lower body strength and power; however muscle hypertrophy may not
always be their major goal even though their quadriceps are freakishly disproportionate to their upper body. Meanwhile what they are doing, surely hypertrophies the quadriceps. So let's get started:

First off, in the gym if you perform a squat and lean forward you activate more of the glutes and less of the quads. The difference with speed skaters is that when they lean forward to skate, unlike a squat  they round their lower lower back changing the resistance towards the quadriceps. Of coarse you wouldn't want to carry a load on your back with a rounded back so we will talk about exercises later.

The time it takes to perform a 500m race at the Olympic level seemed to be around 32 seconds. 32 seconds is a great hypertrophy zone. It's the equivalent of performing 8 repetitions at a tempo of 202. But these skaters take an average of 39 strides per leg in the 500m race. (I actually counted)

The skaters are lined up with no movement whatsoever and at the firing
of the gun must push as hard as they can to build up momentum. It's the time when you have to conquer inertia with as much power and speed as possible.The harder and faster they dig in the ice, the better their chances of winning.

Though they do spend a lot of time bent at the hip in a isometric position the quads are not in isometric. Every time they extend there leg and release they have broken the isometric contraction. Making it more of a constant concentric contraction from around 70 degree knee bend to full extension.

Every time they push of it's one leg at a time making this a dominant unilateral movement. Also the line of push is performed in an abduction of the thigh and extension of the knee.

As almost every Olympic sport, it's an every day thing or an almost every day thing.There maybe days where they don't skate but will perform cycling or they are in the gym working legs. This requires great recovery methods and different manipulations in intensities. One day it may be only working on technique and other days skating at 90%.  For the most part, there would be no more than 3 – 90% sessions a week.We will focus on 2.

Now skating alone will not produce those massive quads. An example of this was the skater from Finland who said he doesn't perform any strength training had the smallest quads in the group. (though he did win). Most speed skater will workout year round and you can assume that they are doing the same movements that most others athletes are performing like front squats, single leg movements and plyometrics.

So now that we dissected the speed skaters quad development what can we pull out of this that we can incorporate with our own leg workouts.

Here's the exercise I chose:

Single leg jump touching the floor. Perform one leg at a time. Unlike conventional lifting, keep your low back round while you jump and stay bent forward at the hip the whole time.

There you have it, try it for 10 weeks and let me know how it goes on my Facebook page.