Why Your Scale Says You’re Getting Fatter 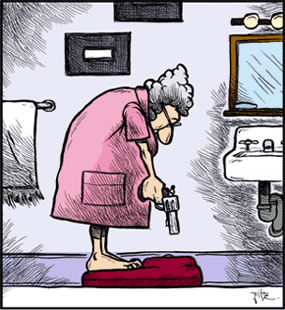 If you used to be more muscular in your teenage years and perhaps you have been inactive for a while, you will be one of those people that respond well to putting on muscle when you first hit the gym. Even though your calories are low enough for you to lose body fat you will gain weight in muscle mass simply because of the change in hormones that come with lifting weights. That’s what we called muscle memory. So you may just be one of those lucky people that are able to lose body fat and gain muscle at the same time.

What this means is that the scale may not be the best measuring tool for you at the beginning because muscle weighs more than fat does. How much more?

Well, we don’t normally measure muscle and fat based on litres but I figured it would give you a better indication if I show you like this: One litre of muscle weighs 2.3lbs and one litter of fat weighs 1.9lbs. In other words, muscle is about 18% denser than fat. So just to give you an idea: A 150lb person with 20L of fat on their body would weigh 188lbs. And the person with 20L of muscle on their body would weigh 196lbs.

So don’t get too caught up with the scale numbers at the beginning. Look in the mirror and be proud that you took the first step in getting back in shape.